Snow by lots of other names…Part Two 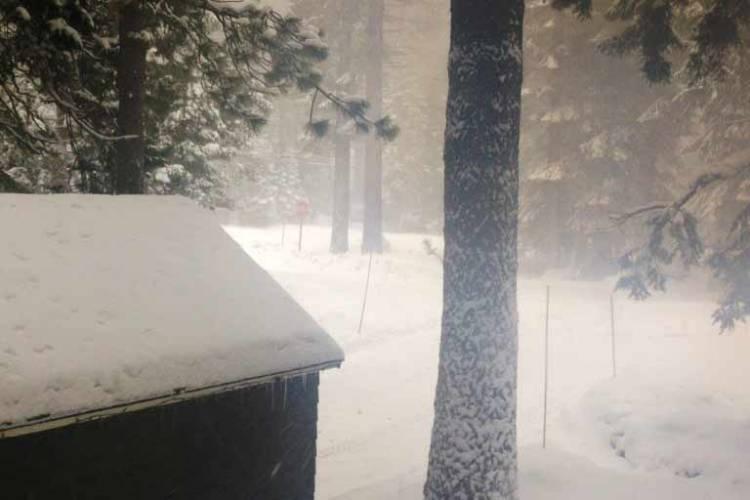 A few weeks ago I posted part one of a summary of names for snow excerpted from my book, “Cross Country Skiing in the Sierra Nevada”. Then it snowed. A lot. And the crowds arrived and we all went skiing…and now finally I’m back with a few more choice words for our favorite bit of the white stuff.

Groomed Powder-During or right after a big storm the snow is gold and dry-beautiful but slow conditions for a nordic skier. If you ski both downhill and cross country, this is the day to hit the downhill slopes, giving the snow a few days to set up on the nordic trails. If there has been more then a foot of snow and the trails have been groomed only once or twice, you may “punch through.” Skating skis don’t stay on top of the snow, but sink in several inches. Slow, slow, slow. It is a great workout, however, and if the snow is really coming down it can be spectacularly beautiful, just don’t expect to set any speed records.

Firm Powder-A day or two after the powder, when the snow has been groomed at least a few times you will find firm powder. The downhill resorts call this packed powder, and they still call it packed powder three weeks later when it has progressed to boilerplate. While firm powder is not as fast as hardpack, it has sped up a bit and you will no longer punch through. This is a great time to be skiing. Especially if the trees are still laden with snow and the air is crisp and cool.

Other types of snow:
Off-piste, corn or silk-Skate skiing is best done on groomed skating lanes at nordic centers, except for a brief period when the off-piste (off-trail) conditions set up perfectly. If it hasn’t snowed in a few weeks, and it is freezing at night and above freezing during the day, the flat meadow off-piste areas can firm up to the point where you can ski all over the sunny, flat areas without sinking. Be sure to take full advantage of these blissful conditions. Some great off-piste areas include Antone Meadows, Spooner Meadows, open areas at Kirkwood, Euer Valley and Devil’s Peak area.

Sun cups-Late in the spring, after lots of warm days and cold nights without any new snowfall, the snow surface starts to look like a giant golf ball. The sunny flats and slopes are covered with little round dimples known as sun cups. They can be anywhere from a few inches deep to a foot or more. Skiing across a meadow full of sun cups is a rough and bouncy affair, sort of like water skiing outside the wake on a really rough day. Since sun cups occur late in the spring when much of the snow has melted, they are nature’s way of telling you to tune up your mountain bike.

Frozen ruts-Ruts are a springtime phenomena caused by the failure of the cross country center to groom the night before. In the spring, the skiers make deep tracks in the mashed potatoes during the day, which freezes into ruts overnight. Ruts can also be caused by snowmobilers who ride over nordic trails after the trails have been groomed. Skiers have a few choice words for these guys and a few places they would like to stick their poles. This is perhaps my least favorite snow condition. The ruts catch your skis and are treacherous. Nordic centers have cure for frozen ruts: they groom the trails at night and then prohibit skiing after the grooming machines have started working in the evening. My advice for morning skiing in the spring is to ski only those trails that were groomed the night before. My plea to afternoon skiers is to please be off the trails before the machines head out for an evening of grooming. My plea to snowmobilers is to always stay off the nordic trails.

Sugar-If snow has been groomed many times and the temperatures are still cold you get sugar. It looks and acts like white sugar granules (except it may not improve the taste of your coffee). While skiing downhill or on the flats through sugar is fun, if the sugar is deep and you are going uphill, it can be a struggle.