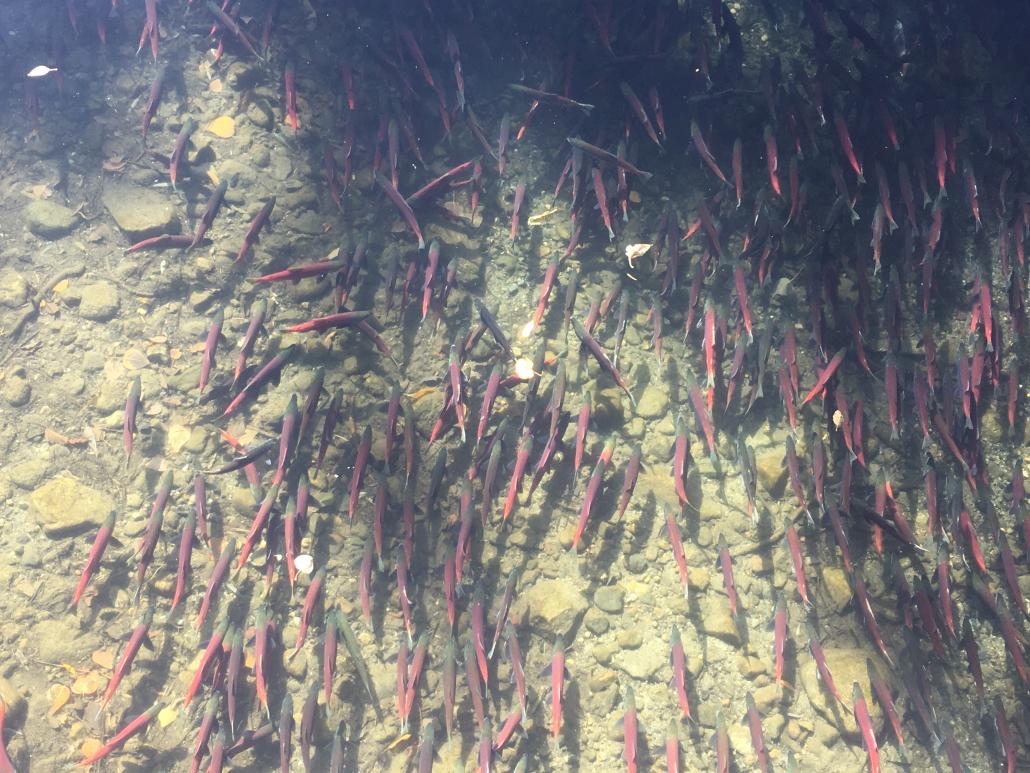 Every year an annual right of passage for me is to head to Taylor Creek near South Lake Tahoe and see the spawning of the Kokanee salmon. Between late September and late October, the fish swim upstream and do their spawning thing right where we can all watch from a boardwalk and bridge across the creek, then a few days later, they die. Usually, the viewing is a quick dash to check out the fish on the way to South Shore or parts beyond. But today, I took my time and quietly watched the show, and discovered the amazing circle of life going on there.

First, before hitting the easy Rainbow Trail you pass signs that warn that bears are active and not to bring any food with you on the trail. A few years ago I came around the first turn and there was a crowd of people watching a family of bears sleeping about 20 feet off the trail. Bears do love salmon. As do raccoons, minks, eagles and various types of birds.

I was a bit concerned that I was too late in the season for a healthy crop of fish, but was pleasantly surprised.There were perhaps more fish than I remember seeing there in years, and all those fall colors in the trees just added to the experience. I could tell, however, that the cycle of life was pretty far along, because underneath all those lively bright red fish were quite a few carcasses on the bottom of the creek.

At the bike lane bridge across Taylor Creek, just downstream from Highway 89,  I hung out for about a half hour and watched the show.  Amongst the throng of fish on both sides, I saw a particularly weak one slowly going through the process of dying. She was having trouble moving, with her head pointed up, slowly getting weaker and gasping for breath. She wasn’t capable of getting enough power to keep from slowly drifting downstream. For some reason, I felt that I was honoring this particular fish by witnessing its demise.

While watching that process, I also was watching the mergansers, a fish eating duck common at Tahoe. There were about a half dozen floating around the creek and every once in awhile one would dive underwater and attempt to catch a fish. After many efforts, one finally caught one,  but dropped it while attempting to get the fish into its gullet. I also saw one merganser grabbing the nearly dead one I was watching, chewing on its mouth for a few seconds, and then spitting it out. Apparently mergansers only like the still vitally alive ones. No worries, the rest of the animal kingdom will be happy to do their part to clean up the remains of the kokanee spawning.